Four Reigns, written by Kukrit Pramoj, depicts the lives of a few people living within Thailand from the time of King Rama V to King Rama VIII. Through the eyes of normal Thai citizens, we are able to see how people may have felt and responded to some of the major historical events that took place in Thailand from the end of the 1800s to the middle of the 1900s. Although the main characters in the novel are fictional, they give a convincing portrayal of what life might have been like for Thai citizens, particularly those from families of higher rank.

The story revolves primarily around the life of Phloi, a young girl who works in the inner courts of the Grand Palace in Bangkok. Living with little contact from her family, many of her thoughts revolve around the King and those whom she serves more closely within the courts. After years of living in the Grand Palace, she marries a man named Khun Prem primarily out of a sense of obligation. She adopts a son, On, that he had had with a previous woman, and they eventually have three other children: two more sons named An and Ot as well as a daughter named Praphai.

Phloi herself shows a very traditional view of the monarchy and reactions to major events, such as World War I and II. From the beginning of the book, the author describes the sense of awe that she feels with all of the kings. In many ways, even after she leaves her duties of a court girl, she still feels an indescribable pull to the monarchy and deep loyalty to the king which is manifest primarily through her reluctance to question the king.

When the first of many military coups takes place in 1933 and the absolute monarch is replaced with a constitutional monarchy, she is resistant to the new change. She is initially in denial when she finds out that her son, An, was involved in the group of people that pushed for this change. Phloi is confused as to why her own son would be a participant in a group of people that seemingly sought to overthrow the power of the beloved monarchy. Even after years pass, she still remains relatively clueless as to the idea of “politics” that seems to be sweeping across Thailand. An and On get involved in politics, but on opposite sides, which creates a rift in the family and seems to further Phlois dislike of politics, especially because from a traditional Thai viewpoint she so strongly values harmony, especially within the family.

World War I takes place and Phloi is again faced with the reality that things cannot and will not remain constant. It seems almost incredulous that their little home of Thailand could be affected by a war with what they call the “western people,” but she again is faced with the reality that things likely will not return to how they once were. Amidst it all, she still fails to grasp exactly how politics are intertwined with it all and the most that it is seen to affect her personally is through her remarks as to the rapidly increasing price of goods that she needs to buy.

Her husband, working as a high-ranking official, at first adapts very quickly to changes that take place as one King passes away and is replaced by the new heir. Khun Prem shows an unfaltering loyalty to the monarchy which is shown by his readiness to quickly adopt new Western practices and quirks of the culture that the King brings into the courts. It seems that not only does his alignment with the King give him confidence, but it also gives him a profound sense of energy and purpose. After the death of King Rama VI and his retirement, he seems to lose his enthusiasm for life and purposelessly wanders through the rest of his life until he dies after a horse-riding accident. Khun Prem in many ways exemplifies the enthusiasm and loyalty that many felt for the King and how he was much more than just a political figure.

After the death of Khun Prem, Phloi of course feels a great sense of loss. However, it is interesting to note that the way she is described as reacting to the death of her husband isn’t as poignant or intense as the way in which she morns the loss of King Rama VI. For her, the death of the king meant a much greater change and wave of uncertainty than the passing of her husband. This again reinforces the idea of resistance to change and a desire for things to remain stable.

World War II years later again destabilizes the life of her and her family and she faces even greater consequences as the Japanese invade Thailand. With one of her sons in prison and another one far from home and deathly ill, thoughts of her sons seem occupy most of her time. It isn’t that she is ignorant to the major events taking place, but rather it seems the she is able to best understand these events through the way that they affect her children.

I thoroughly enjoyed this book and thought that it gave new life to major events in Thailand’s history through allowing the reader to better understand what may have been felt by many people living there at the time. All of the characters depicted were given a depth that allowed you to feel a level of investment in their well-being. During my time in Thailand I have learned about the reverence that people feel towards the more recent kings and reading this novel allowed me to better understand the roots of these feelings.

This book was a little different than the other ones that we read. It isn’t written by any one author, but is from Thai folklore and has primarily been passed down orally from generation to generation. It holds a prominent place in Thai culture and its significance can be related to that which stories such as Romeo and Juliet have in Western culture, and almost every Thai is familiar with the story and has read it. We read an English, abridged version that has done its best to combine the many accounts of folklore that have accumulated over time into one. 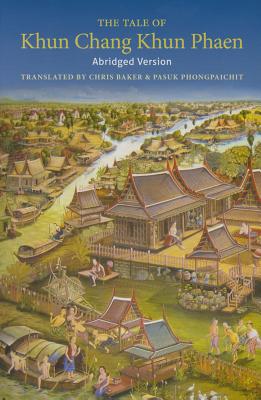 The backdrop for this story is likely set sometime in the 17th century, so you can imagine that during this time there isn’t really any “Thailand,” but it’s a few larger kingdoms such as Ayutthaya that are competing for power. Because the tale is so old and has passed through the mouths of many generations, people aren’t entirely sure if the characters were originally based off of true people or if the entirety of it is made-up.

In the village where the story starts we meet Khun Paen, a dashing young man who is clever but lacks riches, and Khun Chang, a bald and ugly young man who has riches but is made out to be very unlikeable. We also meet Prim (later called Wanthong) who grew up playing with the other boys when they were children and ends up captivating the hearts of both as they all grow older. The main plot of the story revolves around the efforts of both Khun Paen and Khun Chang to win over and steal Wanthong for themselves. Wanthong initially marries the charming Khun Paen, but the furious Khun Chang plots against him and sends him away to fight a war, leading everyone including the king to believe him dead so as to leave him able to swoop in steal Wanthong. But really, Khun Chang had to use a great deal of force to convince Wanthong to marry him and it was only after much trickery and force that he succeeded. Khun Paen eventually returns, bringing back with him another wife, but uncontent and jealous he steals back Wanthong. They run away to the forest and she become pregnant, but due to more scheming on the part of Khun Chang, Khun Paen is sent to jail and Khun Chang takes Wanthong back. She raises her child, Phlai Ngam, who grows up to be just as strong and charming as his father. The last portion of the book follows Phlai Ngam and the battles that he fights with his father as well as his attempts to save and fight for his mother.

Just based off of that short plot summary, I’m sure that you could tell that quite a bit of the story revolves around conflict for Wanthong. It is initial just Khun Paen and Khun Chang that fight over her, but later Phlai Ngam joins in the confusion as well. Wanthong herself is unable to decide what she truly wants and shifts between wanting to stay with Khun Paen for whom she feels love and passion and Khun Chang who provides her with comfort and riches. It is this very indecision in deciding what she wants that eventually gets her killed at the end of the book. This portrayal of women was one aspect of the story that I wasn’t too keen on because Wanthong is treated as an object that is passed around and eventually won over by the person that is able to be the most foreceful or deceitful. A large part of this may also be attributed to the indecisive nature of Wanthong herself, but overall, she is depicted as having very little autonomy.

An aspect of Thai culture that this book helped shed more light on is the importance of Buddhism. This was of special interest to me because the research that we have been doing this summer is looking at how the teachings of Buddhims affect peoples’ views on aspects on Thai culture. Even though Khun Paen doesn’t come from a family of high status, through his monkhood he is able to win a respectable name for himself and accrues a great deal of “merit” which helps him to have success in some of the battles that he fights. Merit is a very important aspect of Buddhism because it is believed that through your good actions you are able to obtain this merit which protects you and guarantees you a better life after you are reborn. Buddhism is depicted with more of a mystical sort of aspect and Khun Paen uses many incantations and mantras to summon spirits and elements to fight for him and aid him in his journeys.

It is also mentioned repeatedly in the book how things were done at an “auspicious” time. Anything from a wedding ceremony to a monk ordination had to be consulted about in order to be done at the “correct” or “auspicious” time. This highlights another aspect of Thai culture where Buddhism dictates important actions that people should take, even down to the timing of it.

Overall, I valued it higher for its insight into Thai culture than I did for any merit on behalf of the characters, all of whom were difficult to like due to their seeming disregard for the other characters in the story. It isn’t until we follow more of the story of Plai Ngam that we feel there is a character that we might begin to root for a little. I also didn’t realize until after I finished reading the book how impactful it is still on modern Thai culture, and there were multiple times afterwards that I would be talking with someone in interviews and they would bring up the book. Having lived in Thailand for a few months, I am glad that I was able to read it to get more understanding into some of the persistent aspects of Thai culture that have persisted over the centuries that it has taken for the country to form into what it is today.