First off, I would like to announce that MY BROTHER EMERSON GOT HIS MISSION CALL!!!! He is called to the Arizona Mesa mission and will leave on June 29th, so soon!! I am so excited for him and know that he will be an amazing missionary!!!

Admittedly, this week hasn’t been that exciting. I know that you all think I’m probably running around fighting dragons and saving kittens from burning trees, but it’s actually not really like that (most of the time). We have been doing a lot of finding lately because some of our investigators haven’t been keeping commitments and our teaching pool has dwindled. But I have faith that we will find those people who are ready to hear the gospel!

Actually, the other day while we were finding in Hong Kong Park, we started talking to a park ranger who was probably in her 50s. I assume she was really nice, I couldn’t really understand much because she was speaking a mixture of Cantonese and Mandarin. But during the course of the conversation she gave us her number and offered to “cheng ngohdeih sihk faahn” (take us out to dinner). She smiled and then she walked away to carry on with whatever it was that she was doing. A little while later, while we were still in the park, she came up to us and handed us each an orange and then left. Quite honestly I’m not sure how she found us again (it’s a decently sized park) or where the oranges come from for that matter (she very conveniently happened to have two with her) but it was still a nice surprise! Later that same day a less-active member called us in the evening so we went down to the lobby of our apartment, expecting to be able to teach her or help her with something. Instead she handed me and my companion each a flower made out of ballons, a scrunchie, and some candy. Again, I’m not quite sure why, but I’ll never complain about being given free stuff.

I also gave a really short talk/testimony in church yesterday which was really scary! I assure you that it was very simple and I probably only used about 30 different words in different combinations. But afterwards members came up to me and told me how good my Cantonese was for only being here about three weeks. Even though most of them were trying to be kind, it was still nice to hear! A small part of me did want to make some funny language mistake in the middle of it, you know, just to make it a little more memorable 😉

I don’t say it nearly enough, but I truly am so grateful to be on a mission right now. I know that the Lord is mindful of all of us individually and will direct our paths even when it seems dark and dreary–especially in those times. Don’t ever hesitate to get down on your knees and ask the Lord to help you. There is nothing too big or too small for Him. If there’s one thing that I’ve learned already, it’s how important it is to have a relationship with the Savior. So if you don’t already have one, start building!

Have an amazing week!

1) A huge basket of fruit some members gave us (did I mention I like free stuff?)

4) BONUS!! The best photo bomb that you will ever see. Savor it. 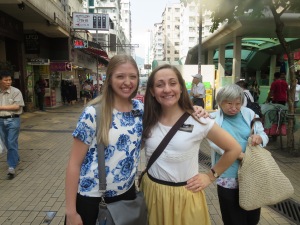