So for this past P-day, we went to a Buddhist Nunnery and it was the coolest thing ever! We walked through a traditional Chinese garden before we ended up in the Nunnery, and I felt like I was living in China back a few hundred years ago, it really just felt like a whole new world! It was also just really neat to experience the culture and understand a little bit more about Buddhism and why people believe in it. We weren’t allowed to take pictures inside the actual temple, but it was so pretty and we even saw some monks in there. One was taking some pictures on his iPhone haha! We also went to the site of the first baptism in Hong Kong and it was so amazing to be there! To just think about all of the progress that has happened since then and to realize again where I was and what I was a part of was so humbling.

This past week’s district meeting was the funniest one that I have ever been to! I spent some time that morning making a birthday cake for one of the Elders in our district and used some powder to make some custard and it turned out very interesting because I didn’t quite have the ingredients that I needed. It was kind of like a lumpy gelatinous layer of plastic on the top of the cake. I brought it out and it looked like there was corn on it, which is actually something that you could probably find over here! And then in the middle of the meeting, almost all of the lights shut off and we ate the plastic custard cake in the dark! I really love district meetings so much because I feel like it always helps me put my perspective back where it should be and get even more motivated to do the best that I can. I love my district!

Our zone has set a goal to talk to as many people as we can through out the day and it has really helped us the be in the mood of always finding. Because we can’t go knocking on doors here, everyone that we find to teach really does come from just talking to people outside, on the bus, wherever. I just love talking to people so much and just hearing about what their lives are like. We are all so different and have such different lives, but sometimes we forget this because we get too caught up in what’s happening within our own sphere.

We saw one of our less-actives this week that we have been trying to hard to get to church. Pretty much right after she was baptized she became less-active and missionaries have been working with her ever since, they pretty much just have never stopped teaching her. I can just see so much potential in her that it pains me to see her standing on the brink of something amazing!

And now for the big miracle that happened this week. So being in China and all, all of the people that we teach are Chinese, but my area especially has a lot of foreigners and we try to talk to them as well, of course, because everyone deserves a chance to hear the gospel. About 3 months ago, we met this one guy on the street from America who had actually lived in Utah for a few years and while he wasn’t a member, he thought that we were good people and appreciated the work that we did. We only had a few minutes with him, but we gave him a flier with our name and number on it and then hurried on to the appointment we had scheduled. That night he texted us to make sure it was our number, but when we tried calling and texting him back, he never answered. So we gave his number over to the international work Elders and pretty much forgot about it. The other night we were doing calls and had this feeling that we should try to call him again, even though it had been months and he had never even answered his phone before. You wouldn’t think it, but it’s actually really scary talking to white people and trying to talk about the gospel in English to them and we were kind of nervous to call, but I eventually decided to get past my fears and to call him. It’s like when you’re calling someone and of course you want them to answer so that you can talk to them, but at the same time you also don’t want them to answer because that means that you have to actually talk to them. We picked up and the first thing that he said was “Hello, Sisters! Your ears must have been burning because I was just thinking about calling you.” What?! He explained that he had just gotten back from a trip in America a few days ago where he had met with a bishop in Utah and got to have a dinner with him where he told him about the experience he had had with meeting two sister missionaries in Hong Kong. He had been feeling ever since then that he needed to reach out to us and invited us to dinner with him and his girlfriend. I could scarcely believe what he has saying, it was all just too crazy to be happening! I ended the call and turned to my companion and told her all that had happened, and then we both knew that no doubt both us and our friend had felt the Spirit prompting us. We haven’t seen him yet, but we will see him next week and hope to help him better understand things and invite him to come unto Christ! I am so grateful for the promptings of the Spirit and for a Heavenly Father who wants to reach out and help every single one of us. I know that He lives and I know without any doubt that He loves us!

Trust in the Lord and don’t shy away from doing things because they seem scary or hard, you never know what can come from a simple act of faith and listening to a prompting!

Pictures:
1) The city!
2) Me and sister Curtis!
3) The first baptismal site in Hong Kong!
4) Part of the garden
5) A building by the nunnery 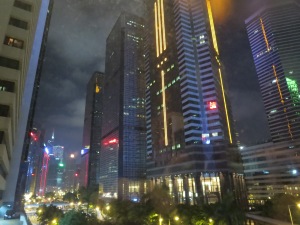 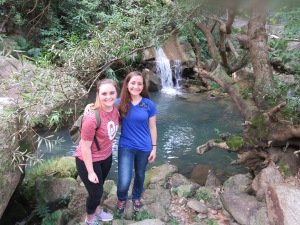