Sadly, we’ve seen some of our investigators go these past couple of weeks, but we have also met some people who have really good potential that we are going to keep on trying to work with!!

We taught Sister Yuen about tithing and she was still totally on board with it all!! She is seriously doing so good and has read ALL of the talks from last General Conference and keeps reading Alma 32 where it talks about faith being like a seed. She really loves the comparison of the two and talks about it all the time 🙂 Our problem is still that she’s not coming to church partially because she oftentimes goes to mainland on the weekends and also because her kids are kind of crazy and it can be hard to get them out of the apartment. We have had some really good help from members though and have some good lessons lined up for this week where we are really going to try and help her understand more!

We visted Leung Popo this week and taught her about repentance because while she is a well meaning old lady, she sometimes gets things confused and this is something that we’ve been meaning to re-teach her for a while. It was pretty good and she actually remembered a lot. Like a lot a lot. Turns out that her home teachers had just come and visited her about 15 minutes before us and taught her almost the same exact lesson. Talk about inspiration!

We also visited a member this week and she took us out to Korean BBQ which pretty much is paradise for a missionary, or anyone for that matter!! It’s really just all you can eat food, meat in particular, which is really nice when you don’t have a lot of money to spend on food! I branched out and ate this little baby squid thing and it was…. DELICIOUS!! ^–^ I think that my palate really has changed since getting here because I used to hate seafood but now I will eat pretty much anything haha! Also I tried this sesame seed dumpling thing that looked rather interesting but turned out to be one of the most delicious things that I have consumed!

So back when I first got to Hong Kong, like my third week here or something, Sister Curtis and I got a phone call from a random girl who was crying and said that she wanted to talk to us. We had no idea who she was or how she got our number, but we met up with her in a park and talked with her. She was having some family and friend problems and was just really sad and wanted advice. We talked for a while (mostly just listened to her), taught a little about Jesus and prayer, and then went our separate ways. It was good and all, but she wouldn’t ever let us schedule her again so 8 months later we still hadn’t seen her again. One thing about me is that I am also a very persistent person and don’t ever forget people or give up on them. So sometimes I still think about all of these people that I have seen at one point and at times call and try to talk to them. The other day I had a feeling that I should call this girl and she finally picked up and what’s more she was willing to meet with me and Sister Percival! We just taught a really simple lesson and in it I asked her when she felt like she started to really believe in Jesus Christ and she told us that it was really after she saw us missionaries in the park for the first time that she felt something. In my mind our first encounter with her hadn’t been anything special, but it had apparently impacted her far more than the two of us had ever realized. You just never know the good that you may do in the life of another person.

Here’s a phrase that I learned the other day:
Yat louh seuhn fung, which literally translates into: one road follow wind, or in other words, have a smooth journey!

Don’t forget to keep doing the small and simple things. Find ways to brighten the lives of others. Focus on the positive and a lot of the negative will go away. And keep working hard!

Pictures:
1) I don’t know why, but around Chinese New Year, the grocery stores are FILLED with tins and boxes of those danish butter cookie things.
2) Look closely, some of those noodles are actually little FISH–they have eyeballs!!
3) A park in our area
4) It’s been cold these past couple of days and the only heating that we have is this little guy haha! 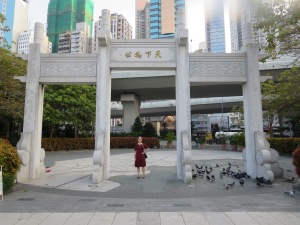