Skip to content
I made it to my new area this past week and it is SO different from my last one. I went from the heart of the city to the middle of nowhere, but I have already learned to love them both so much even though they are entirely different. My new area is a little bigger, mostly because it has a really low population density and has some random mountains and stuff in it. My new companion, Sister Malone, is also super awesome and I have already learned so much from her!
Before I left West Point I was super busy with visiting members and less-actives to teach them and say good bye! It was so hard to leave them, but I know that they are still in good hands because Sister Percival is going to keep doing great work there with them! Sister Yuen, our investigator, had just come back from Mainland and was worried that she wouldn’t be able to see me before I left, but luckily we got to teach her one last time and she is doing so great!
For my last P-day on the island, we took the tram all the way from one side of the island to the other side and though it took a long time, it was so relaxing to just sit and look out the window at the city. I never in my life thought that I would grow to love the city so much, but it really does just feel like home now! They sky out here in the new territories just feels so empty, like it’s missing something, without all of the tall buildings surrounding me. And instead of the buses and taxis and trains and cars, out here we have–dogs. Lots of wild dogs. Luckily though if you don’t bother them then they wont bother you, so I should be good! And anyways, I’ve been practicing my kung fu so I am more than prepared for them haha!

The ward is also super great and really…. crazy! We had a big ward event on Saturday called “puhn choi” which literally means “basin of vegetables” so you can imagine that there was a lot of food there. They literally had huge metal bowls chock full of food set in the middle of each table. It was just a little bit misleading though because it was actually a basin of meat upon meat upon meat with a dusting of vegetable on it. Everybody has their own bowls and they just take food from the massive bowl in the middle and eat it. I love it! There was also karaoke and dancing and based off of my new ward’s performances, let’s just say that I think I’m really going to like it here 😉 Also I guess that Chinese New Year is still technically going on, so I’m not really sure when that ends. I think that it ends on the 15th or something which is Chinese valentines day. Not really sure, but still enjoying the celebrations regardless!

We have some good investigators that we’re working with, though I haven’t been able to meet them all yet because these past few days have been kind of weird and all over the place. I’m excited for this week because things should be a little bit back to normal and we’ll be able to meet with more people. People out here are a lot easier to talk to, so finding is a little easier which is good. I can’t wait to teach all of these people!

Yesterday we also went to a member’s house, the Dung Family, and they were so nice! I also got to try chicken feet for the first time on my mission! Everyone was surprised that I hadn’t had it yet, but being in West Point before I didn’t really have a ton of really traditional Chinese food. It was an interesting experience eating it because you just kind of stick the foot in your mouth and then spit out the bones and cartilage onto the table. Also, not surprisingly, chicken feet don’t have a lot of meat on them so you’re pretty much just eating boiled skin, which while I’m sure that it sounds delectable, isn’t necessarily my favorite thing to eat. But I love trying new foods so I’ll never turn anything down!

I’ll let you know more next week when I’ve actually been in my area for a little longer. Sorry this isn’t the most coherent e-mail, but I promise that it will be better next week… I hope haha!

I love you all and thanks for your support! Make this week the best week ever and keep moving forward!!

1) selfie with the security guard in my building before I left West Point. I’ve seen him almost every day for the past 9 months!

2) what the trams or “ding ding” looks like here. They only have them on the island!

3) My last picture of the city!

4) Dinner at the Dung Family’s house 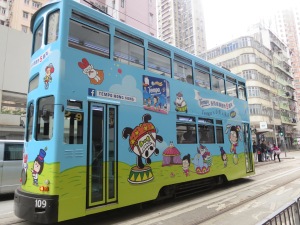 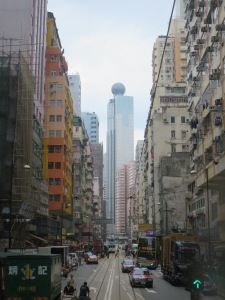