I think that this is probably the millionth time I’ve said this, and probably about the hundredth time I’ve apologized for saying it (so sorry again), but this week was full of SO MANY MIRACLES!! Ah, the Lord is just too good to us! We have been working hard and a lot of it has been paying off!

I have been putting off actually admitting that I’m going home, but I suppose that it’s getting too close for me to keep pretending that I’m going to keep being a missionary here forever *sigh*. I am down to my last few days and will be flying back to the states next week on the 18th. But luckily I still have time to keep working hard and helping as many people as I come into contact with! This Sunday was my last fast and testimony sacrament meeting in Hong Kong, and so I patiently waited to bear my testimony and ended up being the last person. Up until then it still hadn’t felt like I was really actually going home, but for some reason as soon as I got up to the podium I just started crying and had about a few seconds of silence while I tried to compose myself. In that moment there were absolutely no words adequate in any language to express the depth of my love and gratitude to my Savior for this amazing opportunity that He has given me to love and serve so many people here. And then the closing song was “I’ll Go Where You Want Me to Go,” and so of course that only made me cry even more. But at the end of sacrament meeting I was able to cry together with some of the members and just thank them for all that they have done! This is such an amazing ward and there are so many people here who have set such shining examples for me. I am glad that I still have one more Sunday left with them!

The week started off pretty slow and so we went out to do some finding, just walking around the streets, and saw this popo sitting on a bench, so we went and talked to her. It turns out that we had actually met her before about 4 months prior! She is super cute and sings all the time and sometimes responds to us by singing, and she was super happy to talk to us, but had about zero interest in the gospel. But I had the impression to ask if she had family at home and if we could visit them, like, right then. I know, I’m kind of awkward and that’s especially a no-no here in Hong Kong, because people are very particular about their private space and their homes. But she actually said yes, and we walked with her to her house that very minute and met her daughter and two granddaughters, and they are such a nice family! The nine-year-old granddaughter, Lisa, has the most interest and even let us come back and visit her two more times within just a couple of days!! She is so smart and cute and so excited to learn. We are just really trying to get her family on board because it’s a lot easier to go to church when you’re not the only one! It was such a miracle that we were able to find and teach them so many times in just one week! Also the popo is like the cutest person ever!

At church an investigator and her son came whom I have been persistently calling over the past few months (heheh, I don’t give up), and they had such a good time! We also called to make sure that Eddie was coming to church and he said, “Hey, Sister Crockett, I’m actually in Mainland right now!” Ah, there is never an escape from the Mainland monster.

On Saturday morning we had someone scheduled for 9:00 a.m. that we had actually never met but had just called from an old church record. On the way to the church, we met a super nice lady who is so interested to learn more and come to church! But we got to the church to meet with this potential investigator and we waited and waited and called, and she never answered. That was kind of a bummer because we had gone all the way to the church early in the morning for nothing 😦 But we decided to do some studies in the chapel anyway, and about half an hour later a man popped his head in. He kept asking if we remembered who he was and we were super confused until we finally recognized him as the man that we had met a few weeks before while doing finding that said we would meet again “if it was fate.” Well there he was standing in the chapel and we could hardly even believe it! We gave him a tour and then taught about the Book of Mormon and he was so nice! He is a very religious Catholic and kept telling us over and over that he wasn’t going to change religions, but he was open to hearing about what we believed. It was still just so crazy to actually see him again, but it just goes to show that prayers really do work and that if God needs you somewhere, He will find a way to get you there!

Later that day we also had a couple other lessons that didn’t show up, which meant a little bit more time to do some finding. And we actually met this man who was so nice and we’re in the middle of teaching and talking to him on the street when ANOTHER guy came up to us and said that he wanted to know where our church was and attend Sunday, the next day! So we got his number and now have another time scheduled to meet with him! On Saturday, our day turned out nothing like we thought it would, but it turned out to be exactly the way that we needed it to be all because we relied on the Lord and were at the right place at the right time! If we hadn’t shown up to the church early just to get stood up, then we wouldn’t have met the girl on the street that morning on the way or been conveniently in the chapel when the man showed up again, this time ready to be taught. We also wouldn’t have met the other people on the street and been able to have that precious time to teach them about this gospel! So remember, when things don’t go the way that you think they should, get down on you knees and ask Heavenly Father what it is that you are supposed to be doing and learning!

I wish that I could include all of the miracles and lessons that I learned just in this past week, but I’ll have to wait until later when I have more time! I love you all so much!! Have a great week, and I’ll talk to you again next week!!

Pictures:
1) heheh me holding our recent convert’s dog like a baby
2) I had some snack mix stuff and it had cute little fish in it!
3) A random building by where we live
4) Random cows!
5-8) We went with some members to a geology park last week! 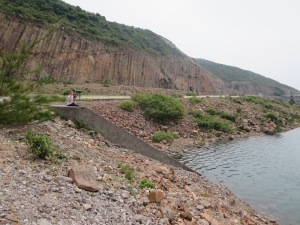