Our investigator, Winnie, passed her baptismal interview and is getting baptized next Sunday, March 5th!!! I am so excited that she is going to take this next big step and even more excited and humbled that I get to play just a tiny part in it all! She was already being taught when I got here so I have only been able to be here for a little bit of her journey, but am still so happy to be able to see her get baptized!

We were able to see some new investigators this week which was amazing! One of them is actually named Jacky Chan, though I am sorry to inform you that he is not actually a martial arts master. But meeting with this guy was so much better than that because instead of his showing us how to find inner peace, we got to teach HIM about his divine potential and what the purpose of life is. We had just called him from a potential sheet so we didn’t really know anything about him beforehand, but he ended up being really interested in what we had to say and Sister Malone and I were both feeling the Spirit because the lesson that we had planned on went totally out the window and we had a really good discussion with him. One thing that you should know about people here is that they have never really thought about the deeper questions in life as to why we’re here and what our purpose is. Sometimes we’ll ask people and they just say “I’d never thought about that before” or “It doesn’t really matter, just as long as you’re a good person” but this guy, Jacky, actually ended up asking US what our purpose in life was and we got to teach him about the plan of salvation. He has had quite a few hard things in his life that I just know the gospel can help him with, so hopefully we can keep meeting with him!

We also met another potential investigator who we didn’t know anything about beforehand and she actually showed up to the lesson and ended up being super cool! When we gave her a tour of the chapel we showed her the baptismal font and she was really interested in it. Also, there were some millipedes or something swimming around in the bits of water that weren’t cleaned up from a few weeks ago so she might have also been staring at those as well….. awkward…. but it was actually a really good lesson with her! She is very traditional and is very into Buddhism and a very feeling and sensing kind of person. We had her say the prayer after the lesson and it was really good, she was so sincere in saying it.

Some fun Chinese for the week:
Baker= mihnbaau sifu which literally translates into “bread master”. So that’s pretty cool

I was also learning some characters this week and figured out that the word for animal is “dungmaht” and the “duhng” character means to move and the “maht” charcter just means “stuff”, so an animal is literally translated into Chinese as “moving stuff”. I just love how much Chinese makes sense–it’s so fun to learn!

I was reading about the parable of the 10 virgins in the Bible and was struck again by the need that we have to prepare ourselves before it’s time. Just like in the parable of the virgins, by the time that you hear the cry it’s already too late. I am not the best person at being proactive and not procrastinating, so this is a lesson that I am still trying to learn. The time to buy oil for your lamp is not when the feast has already started, just like the time to improve and work harder is not when we see an eminent need to do so. When Noah built the ark, the rains hadn’t even started, but it would have been too late if he waited until the sky had darkened before he decided that it was probably a good idea to build that boat that he had been commanded to make. Do what you need to while the sun is still shining so that you will be prepared for when the storms. come. Remember that by the time you hear the bridegroom call, it is already too late, so start now!

Love you all!! Be proactive!!!
-Sister Crockett

I hit my one year mark on the 24th which was CRAZY! Time flies!! This is Sister Vasseur, a sister that I live with who is also from my MTC group 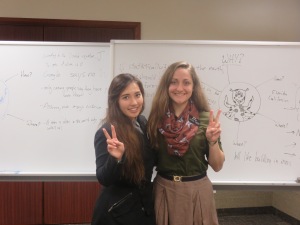 At a ward activity! The girl with the dog is our investigator Winnie who is getting baptized next Sunday!!! 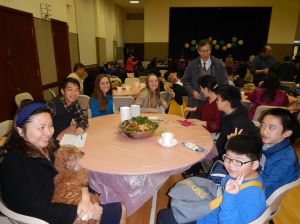