This past week was quite an adventure because of all of the changes that happened! I picked up my new trainee, Sister Branch, and as it turns out she is from England, so I am keeping up my streak of only training British babies hahaha! She is so amazing already and willing to work hard. There is just something about getting a new missionary that helps you to appreciate things more! She bore her testimony in church on Sunday and did so good even though she’s still working on her Chinese. She just has so much conviction and power in the things that she says. It made me remember what it was like to first get here and struggle and appreciate how far I’ve come, though perfection is still miles away! Also the tripanionship with Sister Malone is going great and we all just take the awkward or less-than-perfect situations that we’re given and laugh it out and move on!

The Relief Society held a birthday party for one of our recent converts, Anna, and I just have to say that she is my hero. She is divorced with 2 little girls and lives by herself in what is literally a shack. We visited her again this week to check up on her and I was just blown away by the conditions in which her and her little kids live. But despite all of the unfair things that have been tossed her way, she is one of the strongest people that I have met and has the true gift of charity and love for all. And did I mention that she is actually from Indonesia and lives here by herself and taught herself Chinese which is WAY better than mine? She is seriously just so incredible!

We don’t really have any progressing investigators, or investigators at all for that matter, but that hasn’t changed my resolve to work hard and make the most out of this time that I have been given to serve the Lord. The people that we have met with this week were potentials that we taught English to. Sometimes I get confused with whether I was assigned to speak English or Chinese with how much we teach English to people! But it’s a good way to find new investigators, and we’re just hoping that we are able to actually start teaching some of these potentials. I have also realized that my English is terrible and I don’t know how I have survived with it through to adulthood.

I have been finding every opportunity possible to reach out and talk to others and have realized that missionary work really is about the one. We were on the train headed home after a long day of finding with no success and I’ll admit that I maybe wasn’t in the best of moods. But I realized this and quickly looked around me to see who I could talk to and saw an old man sitting by himself that looked in almost as grumpy and tired of a mood as I felt. So I put on a smile and asked how he was doing to which he responded “lonely old man” My heart broke a little as he told me that he lived alone and had just lost his job which meant that he had no money and no support at all. I bore my testimony of our Savior the best I could because he didn’t have any Christian background and was able to give him a flier just before I had to get off the train. Even though nothing came of the encounter (at least as far as I know), it was a very good reminder to me that if you are focused on yourself and your own needs and wants then you will miss out on so much that is before you and will miss the chance to meet someone who has their own story and their own challenges that they are having to deal with.

I also know that the love of the Savior is real. And I don’t mean that in any sort of a cliche kind of way, but I testify of it with all of the power and emotion which I possess because His love is something as tangible as you and me and is something that I have actually felt. And that is why I am on a mission, to help others feel of the goodness of His love and come unto Him. I am here to reach out to the individual, to the one, just like the Savior himself did while he was on the earth. May all of us continue to find ways to reach out to the one and help them feel of the joy that only Jesus Christ and his infinite atonement can bring.

1) With Sister Percival and Sister Branch (on the left)–my two British trainees together!

2) Our district together one last time before moves
3) Sister Branch trying some chocolate soy milk–it is to DIE for!
4) What part of the street market looks like that we shop at 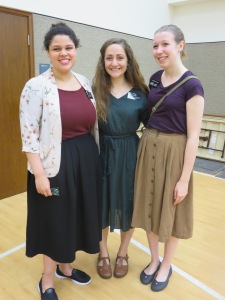 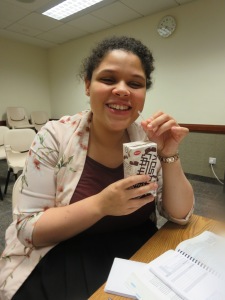