I don’t know why it is, but the beginning of the week always seems to be kind of slow, but by the end of it things get so busy that sometimes we don’t even have time to finish all of our studies! It’s kind of like everyone is always free on the same days and so then we run around like maniacs during those times, but it’s also kind of fun to be so busy 🙂

This week we had time to do a little bit of finding in a Tsuen (a big community of houses usually with a park or something in the middle), and we had some pretty good conversations with people. We sat down on a bench next to this one man and ended up talking about the restoration with him and why there are so many different Christian churches. Turns out that he had just barely started going to church a few months prior because his wife is Christian, and he wanted to see what this whole church thing is about. We taught him a little bit, and he was really interested, but when we tried to exchange contact information, he said that we would see each other again “if it was fate.” He agreed that our meeting each other and happening to be in the same place at the same time, sitting on the same bench, was already a coincidence, but he was insistent that if we saw each other again it would be by the arrangement of God, kind of like a test. He left and then we talked to someone else a few minutes later who was also really interested. But the same exact thing happened when we tried to exchange numbers and he told us that if it was fate for him to see us again, then he would. On my mission I have actually heard a lot of people say this to me and I just never understand. I believe that it’s already fate enough that we meet people a first time, because with all of the people that we run into each day, it really is a miracle, and I know that God times things perfectly down to the second so that we can run into the people that we need to! And after people say to me that they’ll leave it up to fate, I write their names down and pray for them that more missionaries will find them 😉

Our investigator, Eddie, called us in the morning on Thursday and said that he needed help being taken to the hospital because his leg was really hurting him. It was kind of crazy that he chose to call us, the missionaries, of all people, because we have only actually seen him like 3 or 4 times because he’s always so busy. But it was also really cool because it gave us an opportunity to serve and showed that he really did trust us! It is such a special opportunity to be a missionary because you develop strong relationships with people really fast just because you care for them so much and really want to see them and they can definitely tell. He’s still in the hospital now and it’s been a few days, so we are hoping that he recovers soon!

A young man in our ward is leaving soon for his mission so he put on a little concert to invite his friends to as a way to introduce them to the missionaries. It was really fun, and there were a lot of people that showed up that we got to talk to! I also decided that I’m not the biggest fan of Cantonese pop music and probably won’t be buying any albums of it when I get home.

So many other things happened–some of them exciting and some of them just straight up awkward. We got lost a few times wandering through some villages trying to find less-actives. We also ate a lot of McDonald’s ice cream because they came out with a new cheesecake flavor and hot weather is a perfect excuse to eat it!

We are still working hard on getting our investigators to progress and on finding some new ones, but our hard work is slowly paying off! We have some good things planned for this week so I’ll have some more things to update you on next week!

Everyone here always has umbrellas. They’re obviously quite handy for rain in the typhoon and summer seasons, but even when it’s not raining people still have them out. If it’s not raining then they still have them out to protect themselves from the sun because the people here think that it’s prettier to have pale skin than tan skin. It’s kind of funny because it’s the opposite of Western thinking, and sometimes when people see us without an umbrella or anything they look a little bit alarmed. It reminds me of a Mormon Message by President Uchtdorf about putting down your umbrella that is preventing you from taking in the blessings that God is trying to “rain” upon you. In all types of weather and situations, we should put our umbrella down and have a heart full of gratitude so that we can recognize the blessings that God has already given us and prepare ourselves to receive the ones that He has in store for us!

I love being a missionary!! Every day is so amazing and I still can’t believe that the Lord trusts me enough to be here helping these amazing people! The truth of it is that most of the time I feel like I am the one who is being taught, not the other way around! The other trick of it is humbling yourself enough to accept those opportunities to be taught!

Love you all!! Have a great week!! Put your umbrella down so that you can take in the rain–or the sunshine!

Pictures
1) Our Family picture! Me with my two daughters Sister Branch and Sister Percival, and then my second grand-daughter Sister Lee!
2) Ocean view from the Pier
3) We found a huge cockroach in the kitchen–so we trapped it in a container and then got too scared to kill it.
4) Teaching English class 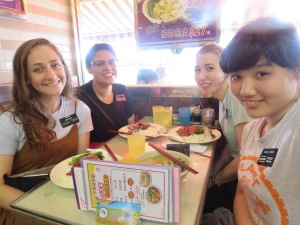 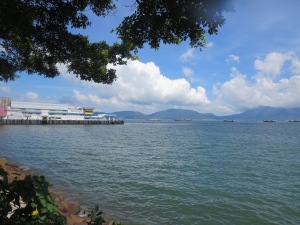 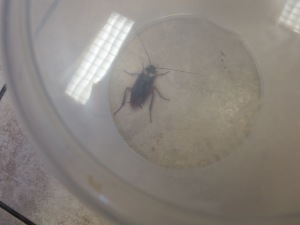 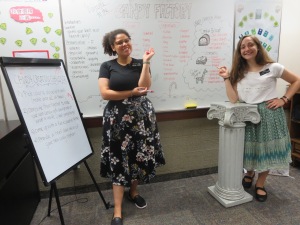