So this past week was of course amazing, mostly because we got to go to the temple again!!! I really can not express how much this sacred and holy place means to me. It has been such a comfort to me so many times on my mission, and I know that if you go into the temple with questions, although they may not be answered right away, you will be comforted.

Eddie went into the hospital and then found out that he might have cancer, but they still need to do some more tests. He came home last week and we taught him about the Word of Wisdom and the physical and spiritual protection that it is to us, and it was such a good lesson! Surprisingly, he doesn’t have a problem with drinking tea and so he should be right on track to get baptized in a few weeks if he comes to church!

This past week also had like four different ward activities that we went to, which was really good because we got to get to know a lot of the members better and had some investigators that came and had a good time! Also there was a Stake Primary talent show, and so I want you to imagine a lot of little kids up on a stage dancing in costumes and singing–it was pretty cute!

Also, the fruit season is in full force and our fridge is pretty much full of just fruit! Every week when we go to the street market we pick out a few new fruits that look interesting and add them to the stash back at home! Someone tell me if there’s a such thing as eating too many fruits, because I’ve probably surpassed that limit. Or better yet, don’t tell me so that I can enjoy living in my ignorance 😉

We were on the train and started talking to this man. He spoke a little bit of English, so we went back and forth in Chinese and English and then he pulled out a notebook and started writing down sentences and reading them out to us. Then he got really serious and said, “But THIS is the hardest word!” and then he scribbled something down and showed us the word–it was n. Yes, like the letter “n.” In his defense it is quite a tricky sound, but it was still really funny! 🙂

We also ran into an interesting situation. The other day we were walking and just smiling and waving at everyone (because missionaries are weird and that’s what we do) and this older lady stopped and talked with us because she recognized the name tag. She told us that she didn’t have a place to stay and was really sad. It just so happened that we were walking back from 7-Eleven, having just bought a quick lunch because we didn’t have much time that day, and were carrying our food in bags in our hands. So we gave her the food and she started crying and thanking us. And we gave her a flier and told her if she needed help she could call us.

And she did. Every day about eight times a day. And she kept asking for us to find a place for us to stay and for us to buy her lunch and stuff like that. And so we finally met with her to try to talk to her and she kept asking us for money for food for the next few days. As missionaries, we’re not allowed to give money to others, so we were put in quite the predicament. She kept insisting and kept pleading with us, so finally some members came over and talked to her and got things sorted out. Let me tell you that that has got to be one of the most stressful and awkward situations that I’ve been in on my mission! The ward has been really good, and I think that things got worked out.

It’s also kept on raining almost every day, and the other day as we were walking home at the end of a long day, we splashed through every puddle, some of them pretty deep, and walked into the apartment soaked but happy! It’s always good weather!

The other day I was doing some calls in some time we had while waiting for an investigator, and saw a number in the phone of a less-active whom I didn’t know and who had never picked up there phone before. So I called it, and surprisingly, the person picked up and was actually happy to talk to me. After finding out that I was a missionary, she said that just moments prior, she and her neighbor were having a hard time so they got together and prayed, and right as they were done I had called them! She invited us over right away because she felt like it was inspiration and wanted to have dinner with us. A couple days later we went to her house which turned out out to be a corridor with lots of rooms in it, each big enough for only a bed, and she lived in one of those rooms. The place was so small that as I crouched on the tiny stool I could reach both walls with ease. She told us right then all that she had been going through and just sobbed as she related it all to us. The Spirit was most certainly guiding us, because the scriptures that we shared fit in perfectly, and as we spoke, her demeanor slowly changed. By the end she thanked us for our visit and told us that she knew that we really were sent by God to help her.

I know without a doubt that God answers all of His children’s prayers. And the realization that I have come to while on my mission is that a lot of the time he uses other people to do so, which is such a special privilege. As a missionary, I am here as a representative of our Savior Jesus Christ and have the blessing of getting to be an answer to people’s prayers every day, and this is such a sweet and sacred opportunity to me. And we all, regardless of whether or not we are a missionary, can find small and simple ways to serve others. And most of the time this can be as simple as just loving them.

I know that we have a Heavenly Father who loves each of us. I know it. I have seen it and I have felt it.

Help others to feel of that love.

Pictures:
1) Our district and the temple
2) The essence of our companionship haha!
3)McDonald’s got Minion french fries, so of course we had to try them
4) We also learned how to make balloons at one of the other activities!
5) Some kids at the talent show 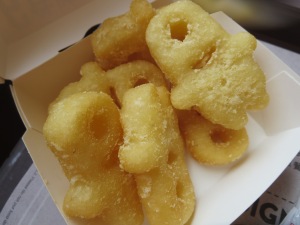 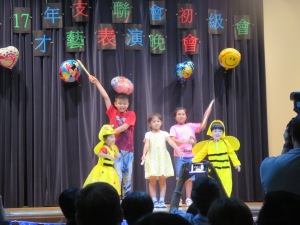