This past week we learned more about the early Thai history and some of the themes that you see repeated throughout it. I know that I’ve talked about Buddhism a little in past blogs, but it really has had a huge impact on the culture here in Thailand. This is of course a huge question that we have with our research here: how much has Buddhism impacted the way that people view the government and to what extent do they realize the impact that it may have had on them?

Jumping back all the way to the 3rd century BC, Hinduism had a stronghold in the region, but Buddhism was beginning to spread into Thailand. In many of the temple here you can see influence predominantly from Buddhism with some Hinduism sometimes still mixed into it. When Buddhism came into Thailand, some aspects took over Hinduism while others remained. Even for those who don’t believe in or actively practice Buddhism, it has shaped a lot of the political culture in the country.

This weekend we went to a day-long meditation retreat where we were able to learn more about Buddhism which helped me to better understand specific ideas within it that have trickled into the thinking of people here. First of all, I just want to preface by saying that meditation is very difficult. You are necessarily supposed to clear your mind of all thoughts, but rather, you are to observe the thoughts that float by and then just let them pass without really thinking about them or become attached to them. This was very difficult for me because every second about five new thoughts would fight for my attention and I had to learn how to not focus on them or let them steal my train of thought. Was I very good at it? No. Did I learn some things from it? Definitely.

There was a monk that was training us and explaining more to us about Buddhism and meditation and as he spoke it did really stick out to me just how much the people here do seem to have a sort of “go with the flow” mentality. They believe a lot in karma and how you have a fate that you are destined for and while you can’t really change it, there are certain things that you can do to build up your karma to either help you in this life or in your next reincarnation. Being a monk is a huge way that you can build up karma for yourself and for your family and sometimes men will become a monk for even just a few weeks in order to boost their karma. 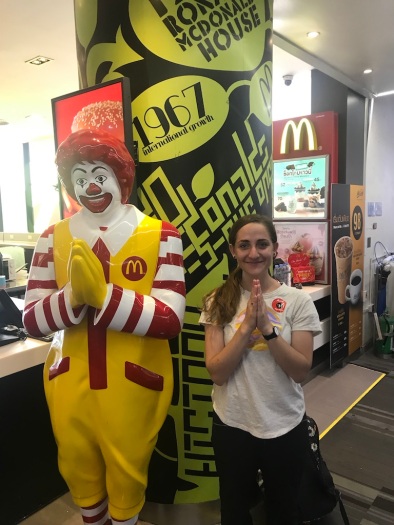 We had a week off of classes, so given the sudden abundance of free time, me and some other people from my group decided to do some traveling to nearby countries. In the week that we had, we went to Cambodia and Vietnam, spending a few days in each country. By this point we had already been in Thailand for over a month and so it was good to get a feel for some other countries in the South East Asia area.

Our main goal in going to Cambodia was to see Angkor Wat, and so we spent a couple of days in Siem Reap exploring the city and taking tuk-tuks (a vehicle that you find in abundance that kind of looks like a mini carriage powered by a motorcycle. Sorry I know that description was probably not very helpful at all). Siem Reap is what you might call a “quaint” little town that seems to exist primarily due to its proximity to Angkor Wat. Angkor Wat itself though was absolutely amazing! It is a temple complex from the remains of an ancient kingdom of the Khmer people that was left abandoned for thousands of years before being found. At its peak, the Khmer had a massive and successful kingdom that dominated the nearby regions, and the splendor of Angkor Wat is a tribute to this. It is also an especially interesting place because you can see both Hindu and Buddhist influences in the architecture as well as the statues that are scattered throughout the complex. It was a neat experience to get to experience walking through the jungle, looking at these ancient ruins and imagining what it might have been like for the people at that time. 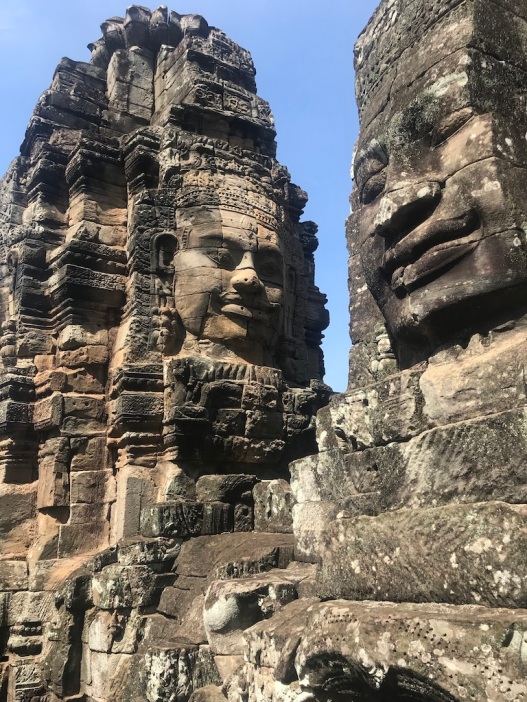 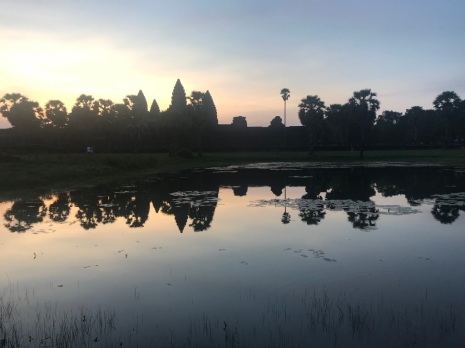 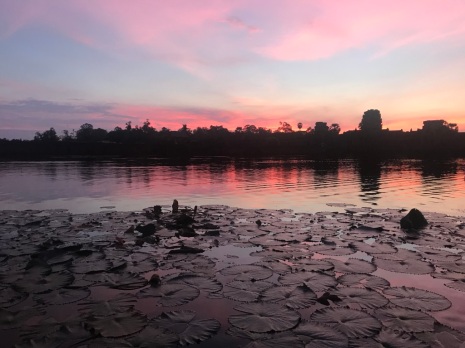 After a couple of days we took a short flight over to Hanoi and explored the city. This was in great contrast to our previous city of Siem Reap which was tiny and rather dirty, thriving mainly on tourism. Hanoi was of course a much bigger city with a unique blend of new and sleek buildings with ones so old and decrepit that I wondered how they were still standing. We got in pretty late and got some banh mi (a Vietnamese-style sandwich) after which I never found another sandwich taste that matched it, which taught me that food will never taste better than it does at 1:00 in the morning. We then spent a couple of days in Ha Long bay, a world UNESCO site, and took a boat ride through the rocky outcrops, taking in the beautiful scenery.

It was nice to have a break from our typical routine of classes and research and I liked seeing the contrast between the different countries. The did all have a similar feel to them, though it did strike me just how much more developed Thailand is compared to its neighboring countries. One way that this was particularly noticeable to me was by how much it seemed like the city relied on tourism and how aggressive and persistent people were in trying to sell things to you. Siem Reap was the worst in this regard and people were not afraid to chase you down in order to try to get you to try things whereas Ha Long Bay and Hanoi did seem to have quite a few people trying to sell goods and services to tourists in particular, but there were also many people who seemed to rely on a different aspect of the market in order to make their income